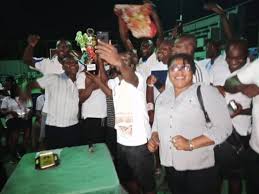 Onitsha Sports Club has played the ENIC tournament for seventeen years since the league commenced twenty years ago and had gotten to the finals for seven consecutive years without taking the coveted cup but won the 2019/2020 edition of the league registered by twelve clubs but played by eleven clubs from the nine states making up the old eastern region after beating their closest rivals, Orlu Recreation Club, by three games to two.

In his address at the awards presentation, the Chairman, ENIC, Chief Kingsley Uduh who incidentally is the Vice President of Onitsha Sports Club, challenged member clubs to see the ENIC league as a common wealth property of all the East of the Niger states and encourage other clubs who are yet to be a part of the league to join.

He used the opportunity to announce that the 2019/2020 season is his last as ENIC chairman having served two tenures.

In her speech, the managing Director of the sponsoring company, Mrs Ijeoma Oduonye, who noted that sporting is one of the major ways of keeping fit and ENIC is committed to helping people take time off work and relax lamented that there is a decrease in the number of participating clubs as twelve clubs had registered but only eleven participated in the ordinary and super leagues.

The captain of the winning club, Chinedu Agusiobo, thanked God for making the club win after many attempts while the President of the host club, Nze Okeh-Chukwuabiama Akogu, dubbed the tournament another means of conviviality, comradeship, exhilarating and joy for sister clubs.

Onitsha Sports Club was also named the star club of ENIC for their doggedness in the league and they celebrated the wins in a grand style.