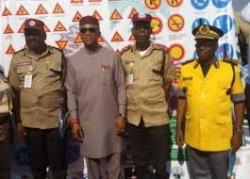 The Anambra Sector Commander, Mr. Andrew Kumapayi, disclosed this when men of the Command embarked on massive check on Road Worthiness of Vehicles, fuel Tankers in particular. He said the exercise became necessary following the incessant falling of fuel Tankers in the state.

“The continued falling of fuel tankers in Anambra  State has gotten to a stage whereby we cannot fold our hands and watch our people die and properties destroyed, so we have come to enforce safety consciousness on the road users, as well as State Government law on Trucks coming into the State” He said.

He commended the State Government for rapid response in making laws that will help reduce the risk of Truck accident, as well as the reformation of the State Fire Service which has helped in averting the most recent one.

On their preparedness to minimize road crashes during the Yuletide, the Commander said they are going to carry out massive sensitization to parks, churches and public places to educate general public on the need to apply caution while on the road.

Speaking on speed limiter, Kumapayi, said the command will not relent in the enforcement to further reduce road crashes to zero level, especially during festivity. He said that speed limiting devices are now compulsory for commercial drivers and expressed joy on the success story recorded so far.

Reacting to the abuse of traffic rules by road users, the Deputy Corps Commander, Benin-Asaba Corridor, Mr. Christopher Kuje, said many of road crashes would have been averted if traffic rules were adhered to. He cautioned drivers especially those of commercial vehicles to ensure that their vehicles are in order ranging from tires to break pads, while maintaining normal speed limit among others.

Mr. Kuje, extolled the proactive measures taken by the Anambra State Government towards curtailing the reoccurring fuel Tanker mishap in the state and assured the governor of the Command’s readiness to enforce the new law on truck drivers

“I’m aware of the misfortune the state has been going through in line with incessant falling of fuel tankers and we have not rested in finding solutions to the problem, I am going to deploy more men of the command to strategic areas in case of any mishap or road offenders” He said.

The Managing Director and Chief Executive Officer, Anambra State Traffic Management Agency, Honourable Patrick Chiezugo Obiefuna, noted the importance of synergy between all the security agencies in the state.

He attributed the aversion of the recent fuel Tanker that fell along Onitsha Enugu expressway, Onitsha to the effect of synergy that brought about quick response from all the concerned agencies in the State.

The ASTMA Boss, while commending the support of the State Governor in making law against the ugly incidence, promised Ndi Anambra of the agency’s commitment to ensuring the law is maintained.