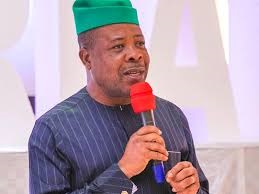 For any responsible and responsive government to achieve success in governance, adequate security of lives and property of the entire citizenry is always the focal point. Against this backdrop, it is pertinent to bring to public knowledge that the‘Rebuild Imo Administration’ by Gov. Emeka Ihedioha has left no stone unturned to ensure that the provision of adequate security; gets priority attention, especially in Owerri Municipal, capital city of the state.
With the advent of the Peoples’ Democratic Party administration administration led by the Governor, Rt.Hon. .Emeka Ihedioha,  came on board, the Special Adviser (SA) on Security to the Governor, Mr. .Raymond Nkemdirim, a retired Director of the Department Of Security Service, DSS(National Headquarters, Abuja) did not hesitate to launch the ‘Operation Iron Gate’, a joint security outfit comprising members of all the relevant national and state security agencies.
The outfit, apart from its competence and high standard service delivery, is also reputed as the most popular state security outfit in the south-east region of the country. The joint security outfit comprises of the Police, the Army, DSS, NSCDC among others. The outfit is led by the Commissioner of Police in the state, CP Rabiu LadodoThe joint security outfit has  proved worthy of restoring adequate security in the state within a short period of time of its existence by reducing crime and criminality to the barest minimum.

During a major raid recently on Douglas Road and other black spots within Owerri capital city, the security outfit recorded tremendous success in the fight against criminals and hoodlums who have been terrorizing the city overtime. .Consequent upon this development, the capital city and seat of government of Imo state was cleared-off of criminals, thereby, liberating Owerri residents from armed robbers, kidnappers, cultists, among others.
This rare feat was achieved by the help of  the Imo Government House Security Intelligence Network which was brought to bear in Gov. Ihedioha’s security agenda. More so, since the beginning of the‘Rebuild Imo Administration’strategy, there has been a cordial relationship and synergy between the government, the police and other security agencies, who collectively evolved ideas on fighting crime to a standstill in Imo state.Notable among such ideas that rekindled hope of flushing out criminals in the state was the quick response by security operatives to distress calls by Imolites under the present administration unlike before now.
Through its instrumentalities towards the fortification of the city gates in the state,the security department has also demonstrated commitment and expertise in ensuring that government of Imo state achieves huge success in this perspective. With a good working relationship between the Special Adviser and the Special Assistants on Security in the three Senatorial Zones of Owerri, Okigwe and Orlu. They have able to put in place security measures which redefined neighbourhood watch of bringing people of the various communities together in the fight against croime and insecurity, with the collaboration of the traditional rulers and heads of traditional institutions in the state.

In addressing the menace of the Niger Delta militancy, the SA (security) had been very much alert.  Recently, because of his concern to infuse lasting peace and order in the oil producing communities of Ohaji/Egbema  andOguta LGAs of the state, the state’s security department is working frantically in ensuring that the repentant militants in the affected LGAs surrender the arms to authority..The Security Adviser maintained that those arms and ammunition be mopped up.This further explains the reason for which he was appointed the chairman, planning committee of the Ohaji/Egbema/Oguta Security Summit recently in the state.
At the inception of the present administration in May,2019, the security department introduced the national security code-number,112.This is a digitalized security network system in partnership with the Nigeria Communication Commission(NCC). The Security Adviser and his team took another bold step by collaborating with the local hunters in the state, as part of efforts in curbing the menace of herdsmen clashes with local farmers.
By virtue of this landmark security achievement by the ‘Rebuild administration’, it also took yet another step in the revitalization of a re sustained Imo state Forest Guard.

Though, criminality and crime associated with insecurity of lives and properties can not be totally eradicated in every given society, adequate security has been restored in the state.This followed the recent massive search and arrest of criminals who specialised in armed robbery, kidnapping in human persons, cultism, among other heinous criminal activities that endanger and threaten security in the state.

On several occasions, the security department in the Government House has embarked on public enlightenment-campaigns via the print, electronic and social media, with a view to sensitizing the Imo public on the dangers of accommodating criminals in state.The security department also emphasized the urgent need for Imo citizens to consider security as “everyone’s concern in the spirit of rebuilding Imo state in the aspect of security.

Therefore, expectations are rife, as the people of Imo state commend the governor for this laudable objective. This informed the public opinion that security aides of government of the state be encouraged to take up security measures in protecting the state’s economy under rebuild.
No meaningful investment by local and foreign investors can be done in Imo State in an atmosphere of insecurity.Again, to save the state which is gradually recovering from socio-economic decay, all hands must be on desk in the security of lives, properties and economy of the state from criminals, and enemies of the state. Indeed, Imo is on the part of rebuild, as people of the state are urged to continue with their support for Gov. Ihedioha and the state for desired progress.