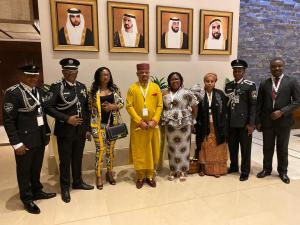 An integrated security collaboration and information sharing have been described as a necessary panacea for the multi-dimensional, socio-economic and security challenges facing the African continent. This consensus opinion was contained in the communique issued by participants issued at the end of an International Conference on the issue of security in Africa.

A borderless African Continent motivated by a dynamic collaboration among the leaders of the countries of the continent has been described as the panacea to the multi-dimensional challenges facing the ancestral home of the world black people. Political leaders and leaders of other stakeholder groups in the continent have therefore been called upon to work towards a better regional integration, especially in training and intelligence so as to produce a United States of Africa by the year 2063.

This consensus decision was contained in the communique issued at the end of the 16th Annual Conference of the Security Watch Africa Initiatives, held from November 6-7; at the Swissotel, Al-ghurair and Radison Blu Hotel, Dubai, United Arab Emirate.

The conference, which had: Global Security Outlook: Challenges, Impediments and Prospects for a Secured Africa; also featured academic presentations on various topics related to the theme and the presentation of awards to 68 individuals, organizations and institutions from the academia, clergy, media, military, police and security agencies from different parts of the continent. Prominent among the recipients was Honourable Dr. Kemdi Chino Opara; an America based renowned philanthropist and publisher of GIST AGRICA newspaper. The programme was attended by stakeholders, groups leaders and participants from all parts of the world.

Other decisions taken by the participants included: intensification of tracking of illicit financial flows into the continent; better and integrated  border security management and review of international laws governing border security management among African countries; emphasis on the importance on non-kinetic efforts in counter terrorism and counter insurgency operations and need to address the root causes of insecurity on the continent such as religious extremism and intolerance, bad governance, illiteracy, unemployment and poverty.

They therefore called for an enhanced security and economic development with the countries of the continent making concerted efforts to actualize a borderless United States of Africa by 2063; better regional and international cooperation, coordination especially training and intelligence; improve on good governance, strengthen states and institutions, not weaken, corrupt or disrupt them and continuous training programmes for stakeholders and security personnel.

Five key presentations were made at the two-day programme; with Professor Wilhelmus Josephus Breytenbach, Emeritus Professor of Political Science, Stellenbosch University, South Africa, presenting the lead paper on the title: Historic Perspective to Leadership and Security in Africa.

Speaking on Combating Terrorism and Insurgency through Non-kinetic Approaches; Major General Usman Shehu.  Mohammed of the Nigerian Army, who spoke on Combating Terrorism   and Insurgency Non-Kinetic Approach; revealed that the Nigerian Army is on the path to victory in the fight against terrorism through the introduction of some multi-dimensional strategies such as promotion of human rights, rule of law, capacity building and deradicalization of the group.

A former Ghanaian Chief of Defence Staff and Chairman Board of Trustees, Security Watch Africa, organizers of the conference, General Josef Nunoo-Mensah, (rtd), in his address noted that in spite of globalization, Africa continent seemed to be receding backward, blaming the scenario on bad governance. He therefore urged Africans to rise up to the challenge and change the narrative.