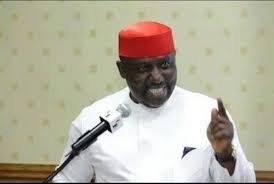 The People’s Democratic Party (PDP), Imo State chapter,  has condemns in strong terms the unwarranted and premeditated attack on the Senior Special Assistant to the governor of the state on Security, Hon. Jasper Ndubuaku, who was ruthlessly assaulted by thugs on the instruction of their pay master and former governor of the state, Rochas Okorocha.

In a release made available to GistAgrica the party said It was the greatest affront to the entire people of Imo State that after looting the state and rendering every sector of her economy nugatory, Okorocha had the effrontery to beat up an appointee of the present PDP government which has come to revive the state from her comatose state. “Okorocha, who relied on violence and threat to ascend to the hallowed chamber of the senate, has crossed the red line again, but this time, he will not escape it.”

“It is evidently clear that Okorocha who ran Imo State aground while he was governor, is bent on disrupting the relative peace which engulfed the state since the conduct of the 2019 general elections when the people stopped his demonic plans to install his son in-law and acolyte as his successor and instead voted a PDP government led by His Excellency, Rt. Hon Emeka Ihedioha.”

“We have it on good authority that the former governor has camped thugs numbering over 200 at his private residence at Spibat Estate [which he of course acquired with ill-gotten wealth] and commissioned them to unleash mayhem on the people of Imo State, with Hon. Ndubuaku as one of the notable casualties.

However, we want to state without equivocation that we are not cowed by Okorocha’s bold faced antics as it will only lead him to an inevitable destruction, as no man is superior to Imo as a state. ” The party said it support every step already taken and those that will be taken by the state government to bring Okorocha to book after eight years of mindless plundering of the state’s commonwealth.