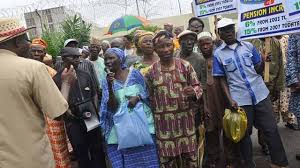 Foreclosing every unforeseen circumstances, Imo pensioners will soon have every reason to smile as the Re-Build Imo Government of Governor Emeka Ihedioha has advanced plans to pay the state pensioners jumbo pension arrears by this month.

Rt. Hon Chuma Nnaji, the State Commissioner for Public Utilities exclusively disclosed this to GistAgrica recently at Nnenasaa, the Council headquarters of Njaba Local Government area of the state during the 2019 Women August Meeting of the Council area presided over by the wife of the state Governor, Lady Ebere Nkem Ihedioha. The Comissioner assured that soon the problem of over 6 years indebtedness of pensioners in the state will be a thing of the past as the state government through its recent computerized biometric data has been able to sanitize the system He commended the state Head of Service for playing major role in blocking fraudulent loopholes and ensuring that the actual statistics of the pensioners are obtained.
The Commissioner also gave Kudos to the new administration for providing a road map of water policy which he described as the first of its kind since the creation of the Eastern Heartland state in 1976.
Nnaji pointed out that the water policy will enable the state to enjoy collaborations with foreign investors while noting the milestone achievement so far of the state administration as opening the single
Treasury Account System (TSA).

He condemned the immediate past administration for not maximizing the potentials of professionals in the Ministry that occasioned inheriting rots and decays in all the various departments.
Nnaji who was one time Deputy Speaker, Imo State House of Assembly further showered praises to Imo first Lady for her dexterity in handling women as well as empowering them noting that the Re-building Imo  Mantra is highly gender friendly.