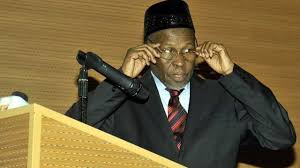 While we theorize and philosophize on the tragedy of having an intellectually barren Ibrahim Tanko Muhammad as number one judicial officer in the country, we must not pretend to dis-remember the following facts: Muhammad Tanko did not just fall on the Supreme Court. He passed through a process. And that process is supported by a system that is deeply institutionalized. It has a name which is QUOTA SYSTEM.

He was appointed a judge in the North and pushed up to the level of the Supreme Court by Northerners who knew he lacked the competence to hold such a very high judicial position in the country. Tanko is a product of Quota system which is synonymous with the Arewa North where a male kid from Yobe could be admitted into Unity College with the cut-off mark of just 2 while a kid from Anambra needs not less than 139 to gain admission into Unity College IN THE SAME COUNTRY. A culture of mediocrity. The North practices this. And that is her shadow. But it is also her doom. That is her strength as well as her weakness. Her strength because while the Southerner is spending years going through the academic process, the North is bending the rule to give her people undue advantage over the South.

Her weakness because while the Southerner who went through the normal academic process is equipped with the mental capacity to compete anywhere in the world, the Northerner like the Buharis and Tankos of this world who had the process suspended in their favor come out with neither the competence nor the intellectual capacity to compete on a level playing field with others. This is why you mostly see Arewa Northerners only in NNPC and other government owned establishments while the Southerners are out there in every part of the country competing and doing well for themselves.

Let’s not get it twisted, Muhammad Tanko is not an isolated case. He is exactly a true representation of the Arewa North in her real unadulterated form. Tanko is the North and the North is Tanko. If we were to pay ourselves the courtesy of being blunt, we would admit that MOST (not some and certainly not a few) of Arewa Northerners occupying different strategic positions and heading critical elective or appointive institutions in the country are as intellectually handicapped as Muhammad Tanko.

Should we name names?

(1) Muhammadu Buhari who is today the President. Was he not thrown up by the North? Was the process not suspended just so that he could get into the Army with a mere recommendation letter?

(2) The current EFCC acting chairman, Ibrahim Magu who thinks institutionalizing the fight against graft means building a physical structure for the EFCC.

(3) The immediate past Police IG, Idris Ibrahim who, by the way, holds a degree in Law.

We must not allow ourselves to be blackmailed into romancing the truth which is that the FEUDAL Arewa North doesn’t care about merit, excellence or professionalism. All that matters to her is domination. As long as a fellow Arewa Northerner is the head, even if he has been certified mentally, physically and emotionally unfit for the post, the North will support such a fellow just to be seen as dominating others.

Did we not see how the Senate President rushed to stop Tanko from answering further questions? Did we not watch the Northern dominated Senate confirm the Aeroplane driving Tanko? So while we analyse the “Aeroplane driver” and how “The British introduced Technicalities into our laws” we must be truthful to ourselves by admitting that as long as the North and South with two opposing world views are yoked together, there can be NO REDEMPTION for Nigeria as a country. You know this. I know this. We all know this. The time has come when we must be honest enough to say this and keep saying it.

Instead of waiting for them to commit one blunder while we busy ourselves analysing it, how about we collectively work towards dismantling this iniquitous British experiment so that from the ashes, healthy Nations can emerge and exist as they did before the British came with their pernicious enterprise that was colonialism?.